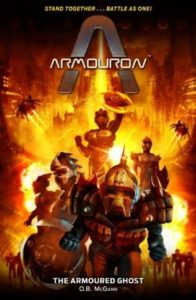 ‘For centuries, an order of knights worked to keep the peace across the galaxy. Mighty warriors, the Armouron Knights fought for Honour, Duty, Compassion and Justice. They battled organized crime and helped defeat cruel dictators. They prevented wars. Life in the galaxy was not perfect, but people knew justice and peace.

‘Then, on one planet after another, huge corporations began to seize power. They wanted to control the entire galaxy – and only the Armouron Knights were stopping them. The corporations spread lies about the knights, turning people against them. They sent their private armies to defeat them. Terrible battles were fought, but one by one, the Armouron Knights were captured or killed.

‘Now the last of the Armouron are scattered around the edges of the galaxy. Not many are left, and they are getting old. A new generation is needed. Planet Earth is controlled by the Perfect Corporation. They call it a Perfect World, but in truth, it is a prison. Here, on Earth, one of the last remaining knights has recruited five young warriors to train in the ways of the Armouron. They lack experience, but they make up for it with raw talent and determination. They are the only hope for a new generation of knights.

‘And the galaxy needs the Armouron more than ever . . .'

Elite warriors who banded together centuries ago to fight for justice and for freedom.

Under the control of a huge corporation, led by the power-mad Chairman.

Trainee gladiators at the Nu-Topian Academy - where something is very, very, wrong.

The grizzled old master of the armour workshop, with a secret in his past.