The issue of what, and more importantly how children will read in the future is a battle – not just for hearts and minds, but also for attention spans. In this, the second of this three-part post, I’ll outline how I believe this change in reading will shape publishing as we know it, and how those of us working in publishing now should be taking the initiative.
I was in Eason’s a little while ago and took this picture. It shows the display stand for children’s comics and magazines. The magazines cannot actually fit on the shelves because of the sheer volume of bulging blister packs stuck to the fronts of the mags, containing cheap plastic widgets. 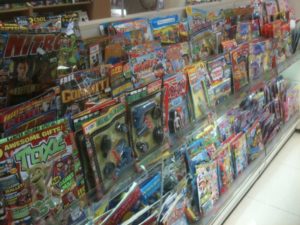 In many cases, the mags have to come in plastic bags to contain all the stuff that come with them.
The fact that most of these ‘gifts’ are pure unadulterated shite and will almost immediately be discarded, is disguised by announcing them to the world with words like ‘Mega!’ or ‘Wicked!’ or ‘Awesome!’ in large, colourful print. Bejaysus, those people in marketing are an awful cunning bunch. The cover of one issue of my stepson’s favourite mag used the word ‘Mega! no less than five times to describe their various gifts, competitions, posters etc.
I am somehow reminded of the Europeans buying the American continent off the natives with trinkets and alcohol (and ethnic cleansing).  Not that I’m suggesting that the publishers of these mags are subjecting our innocent little darlings to cultural extermination. The business and consumer relationship is a symbiotic one. They are a constant influence on one another. I just think it’s a very clear indicator of where reading – and the absorption of information in general – is headed.
I posted a blog a while back about the difficulties bookshops are facing. Things have changed a lot in the last ten or fifteen years. I spent a lot of time looking at the new stuff in bookshops when I was a kid, but I bought hardly any new books. Most of what I bought came from secondhand bookshops, where marketing didn’t exist and categories were much more general – in fact, books were lucky to be categorized at all. And, of course, because they were secondhand, the authors saw none of the money I spent.

There are very few of these kinds of shops around any more, except for the limited ranges in charity shops and places like Chapters on Parnell Street, who have become a kind of a hybrid of both kinds of selling.
I was also a regular at the library; a dark, musty place with a limited selection for children, but I didn’t know any different. Today’s libraries would put it to shame. I’m not indulging in nostalgia here – nor is this a ‘you don’t know how good you have it’ rant. My main point is the limited access I had to text of any kind. Books cost more in proportion to your income. The newsagents had less to offer.There were no mobile phones, very basic home computers and no world wide web.
Everything was printed on paper. It was stored and accessed in specific locations, in limited numbers, in a static state. Once printed, it did not change, it did not update itself. If you were seeking information, any reference one piece of text made to anything else had to be accessed through another piece of printed material, which you might or might not be able to find or reach. The ability to access the world’s information was dependent on who you were, where you lived, and how much money you had.
And, of course, your education, your ability to read – to know how to choose between different texts, interpret different styles of writing, and to be able to read at length.
Now our lives are flooded with text – coded information that you have to be able to read to survive in the modern world. Search engines provide an astoundingly efficient way of finding whatever information we want. Young people are growing up thinking of text, not as something printed on page, but as something that is fluid, changeable, something they interact with and can affect. A link to other things.
They are becoming adept at surfing, reading across a wide surface from one subject to another.  But, as a result, many readers are investing less time in diving into this sea of information to any great depth. It’s hard to blame them. There’s so much cool stuff out there to distract them.
Them? Hell, I’m as bad myself. I try to research something for a story and end up, several hours later, fascinated by something that has nothing to do with what I was originally looking for.
As a writer, trying to make a living by feeding into this ocean of text, I’m affected in two ways. The first is the way I have to write: As a writer of books, I’m not just competing with other books.

My potential readers have to be dragged away from magazines, websites, social networking sites, blogs – never mind games and the telly. So I have to do a Dan Brown, trying to produce stories that protrude with so many hooks you can’t read them without snagging your sleeves. It’s not enough to grip your readers, you have to cling desperately to their leg as they walk away from you. Soon, we could be reduced to the literary equivalent of sticking plastic widgets to our text.
The second way I’m affected is that I’m . . . well . . . getting on in years. At the ripe old age of thirty-six, I am substantially older than most of the readers my books are marketed to. It’s true of most writers for young people. They are not, by and large, young people themselves. Except now they are.
Books are, by nature, longer than the average post on Facebook or a blog (even this one). They take time to write and are therefore, like most published writers, old by the time they are finished. They can take a while to read too. A book does not tell you about your friends and family, it doesn’t interact with you. Professional writers are not just competing with each other. We’re competing with our readers. They are writing for each other. The newspapers discovered this problem some time ago.

The wondrous connectivity of the web has created a text that offers communication with people you can relate to, who speak your language. There is an immediacy, an excitement and sense of techno-cool that is easy to read and easy to access. Something you can share with your friends. Text hasn’t just become part of your social life, it is actually replacing parts of your social life.
But more to the point, the mass production of text, which was once the sole territory of print publishers, has become available to the masses. These advances have allowed the readers to seize the means of production. The nerve of them.
But it doesn’t stop there. Because text is starting to lift off the page and come to life. Audio books are becoming increasingly popular. The Amazon Kindle has text-to-speech software that will read the book to you. It’s like having Stephen Hawking speaking in your ear, but it’s an interesting start.
In the opposite direction, voice recognition software has left its awkward, fumbling days behind and is becoming ever more practical.

Google’s Nexus 1 phone boasts that many of its applications can be voice activated. With voice-to-text, you can speak into the mike and see a text write itself before you eyes. The phone can even censor swear words – a feature I find a bit scary.
How will this affect the next generation’s ability to read and write at length – or even do these things at all? I don’t believe that text is going anywhere, but what about the ability to interpret it? At the moment, it’s certainly not the publishing industry who will decide. We may have hardly any influence at all.
Publishing is no longer something that is done and then finished – handed from one small group of people out to another, larger one. It is an ongoing process in which anyone can take part. Which I think poses a couple of questions.
The first has been faced both by publishers and readers ever since manuscripts started being reproduced in large quantities as books: Faced with such a quantity of text, how do we choose what to devote our valuable reading time to? The more sources of text, the harder that question is to answer.
The second question is: How does a professional publishing industry survive in an environment where anyone can publish and access text for free?
And if it doesn’t survive in any recognizable form, what will happen to the quality of the material that continues to be published?
I’ll have a look at that in Part 3.