I’m looking at body bits for this post. And I’m going to start with a book-related story which grabbed my attention a while back: 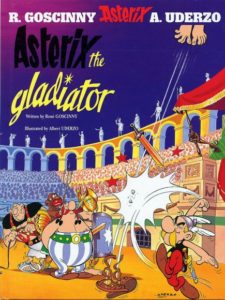 According to an article in ‘The Telegraph’ a guy named Marcel Kamp, of the Neurosurgical Department at Heinrich-Heine University in Düsseldorf, has led a team in a project examining the number and severity of brain injuries in ‘Asterix’.

Their paper ‘sets out with no apparent irony their aim to “analyse the epidemiology and specific risk factors of traumatic brain injury in the Asterix illustrated comic books”. Apparently, the books contain over 700 head injuries – over half dealt out by Asterix and Obelix themselves – and most characters enjoy a level of recovery that is well above what could reasonably be expected, particularly given the medical treatments available at the time.

I concur. There is definitely a sorry lack of caved-in skulls, sub-conjunctival hamorrhaging and ongoing seizures. Honestly, no wonder nobody takes comic books seriously . . . Neurosurgeons, on the other hand, are clearly very serious indeed. 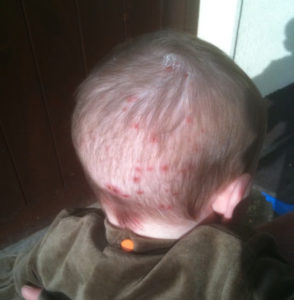 Earlier in the year, our two-year-old caught a bad dose of the chickenpox. We found ourselves in the funny position of half-hoping the other two would catch it as well. Actually hoping our kids would catch a disease. This was a tough one. Chickenpox can have much worse effects when you’re older, so there’s an advantage to having it when you’re very young and developing an immunity to it as a result. But it’s still hard to see your baby covered in sores, especially when she’s too young to understand why she’s not supposed to scratch them, despite unbearable itching.

Our youngest ended up catching them too – the sores spreading everywhere, including the back of her head. Our boy somehow managed to escape them, of course – the only one who doesn’t wake us up crying when he can’t sleep. Don’t get me started about the lack of sleep. Both girls came out of it with a few small scars, although those are fading as the months pass. 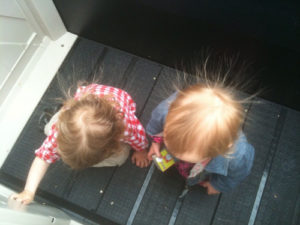 At another point during the summer, a bunch of us were over at my Mum’s house one weekend. It was a hot day, and my sister and I were putting together one of those large plastic storage boxes for storing garden furniture or stuff like that. My toddling daughter and her cousin naturally figured that this marvellous construction was entirely for their benefit, and proceeded to run in and out of it as we put it up. There was obviously some serious static trapped in the box, no doubt brought on by the heat. Every time they ran in and closed the doors behind them, their hair stuck straight out like they’d poked their fingers into electrical sockets.

And finally, here’s a talk where Paul Root Wolpe discusses bio-engineering, and where it’s going. Some of the nuttier examples he shows might seem like they’re straight out of a science fiction film, but it’s all real.