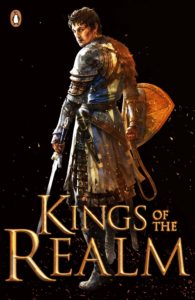 Chasing immortality, a group of Trinity veterans - led by the famous Giddion Warnock - open a long-forgotten tomb in the Plain of Ahten, releasing an ancient and hungry evil. Vallen, Giddion's younger brother, escapes the tomb and races across the realm to warn of the world-destroying Devourers that have been unleashed. But will anyone believe him?

War's Harvest follows Vallen and the fortunes of those of he meets across the continent - from Tolka, a Celestial ambassador to Squall, an Earth Clan warrior and Seliza, a Salamander witch - as they betray allegiances, forge alliances and watch as their homelands are destroyed.

Exciting and fast paced, War's Harvest provides an engrossing history to the vivid world that Kings of the Ream players experience online.