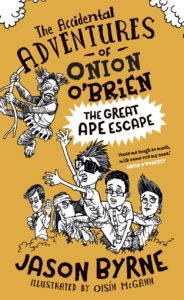 Meet Onion O'Brien. He's an ordinary kid growing up in the suburbs where nothing ever happens. Except when it does, it always happens to him. Luckily, his friends have his back. There's Sive O'Connor, Dallan Okoye, Cliona O'Hare and Onion's big brother Derek (who thinks he's too cool to be in the gang). Together, they're the Five O's. For his birthday, Onion is taken to the circus, where a baby ape manages to escape and find her way into Onion's house.

Can the Five O's save her from the evil ringmaster and keep her hidden in suburbia long enough to get her safely to Tota Freedom Wildlife Park? This is the hilarious children's debut from comedian, Jason Byrne. Illustrations by Oisín.