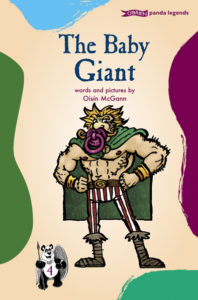 Finn MacCool is the biggest, strongest giant in Ireland. He is happy and hairy and spends most of his time fighting bullies.

But Finn is tired of fighting. One day, he and his wife Úna decide to go on holiday. Finn builds a huge stone bridge across the sea to Scotland. But as he and Úna get ready to cross, another giant comes stamping over the bridge. This mo

nster is as big as two normal giants. He is nasty and mean and he won't fight fair. And now he is coming to beat up Finn MacCool.

Finn and Úna need a clever plan to beat the Scottish giant, and they need it fast...