My brother sent me this and I thought it was pretty cool, so I’m sticking it up here. Somebody’s built a life-size motorcycle that looks remarkably like Flash, 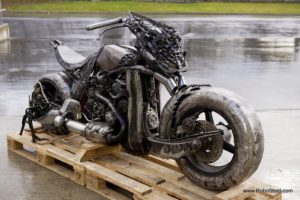 one of the ancient, living machines known as engimals that appear in the Wildenstern Saga. You can see Flash on the cover of ‘Ancient Appetites‘.

‘Merciless Reason’, the third Wildenstern book, is coming out early next year, and I’ll have the front cover for you to look at pretty soon – it’s all but finished and the designer and illustrator have both done a brilliant job, but there’s just a couple of tweaks to do.

I also received this bit of video, and wanted to include it too. Basically, it’s a demonstration of how a superconductor can be made to act like a levitation device, though I suspect we’re still a few years away from hover cars yet. Don’t ask me how it does it. Apparently it’s a quantum thing. The guy doesn’t explain it very well (it’s ‘locked’ there, he says). Even so, it’s excellent.