Pictures are the language you learned without realising it. From before you were born, they have been influencing, informing and enriching your life. They were the illustrations in the books about babies your parents read with nervous anticipation as they waited for you to emerge from the womb. They were the health promotion posters on the walls of the hospital on the day you arrived. They were the diagrams on the instructions your parents followed to put the car seat in, to put together the baby gear and the toys that would promote development.

They were the illustrations on those toys, on the play-mat and your high-chair tray, your plastic plate and your bib. They were the images on the cloth books and board books that you chewed as your mum and dad gazed down at you with love. They were the cartoons you watched as you grew. As your parents and teachers first taught you to read, a systematic process laid out in the school curriculum, they used pictures to help you understand the meaning of words. But there was no systematic process to teach you how to read the lines, shapes and colours that made two-dimensional symbols on paper. 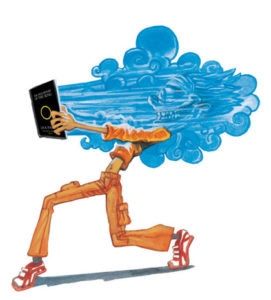 It was taken for granted that you would understand these without being taught.

Even as you mastered reading words, you continued to read illustrations, because they made the early struggles easier, and still they showed you things that would contort words into knots to achieve the same meaning.

These two languages were two aspects of the same thing, human expression, each as valuable as the other, though you wouldn’t know that from the way the world treats them. As ‘reading books with pictures’ became an idiom for ignorance and stupidity, as illustrators were sidelined, given a lower status than writers in publishing lists and book awards, you still looked at pictures in newspapers, magazines, adverts, adult cartoons, instruction manuals and road signs. You graduated from comics and cartoon strips, ‘growing up’, but it was still okay to look at political cartoons that could convey more meaning with one image than many of the news articles you read. Imagine the worldwide web without pictures. Imagine if the only images we had were the ones that could be photographed.

And now, as a new generation of parents around the world sit down to read picture books to their children – without explaining to them how to read pictures – remember what it was like when you were that age. Remember that you were able to learn this language of illustration so effortlessly, so instinctively, because someone else put in the time, hard work, imagination, passion and expertise to understand how a change in the curve of this line can be the difference between showing contentment and regret; how this shadow can give the illusion of depth to a two-dimensional image, how adding this colour will change the entire feeling of this picture.

You can read this language because an illustrator uses it so skilfully and expresses themselves so clearly. It is the language we use to learn other languages and it is the only universal language the world has.

We could do more to show our appreciation for that.