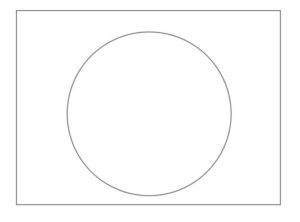 This is a post about the small ‘icon’ illustrations I’ve done for the heads of the chapters in my latest book, ‘Rat Runners’. I do pics like this for all my novels – or at least the novels I haven’t been commissioned to do by somebody. Partly because I want the inside of the book to look distinctive as well as the outside (quite difficult with a novel) and partly because some things are best described with a picture . . . and partly because I just like pictures.

I start this process in the first read-through of the galley proofs – where the pages are first laid out as they’d be in the printed book. 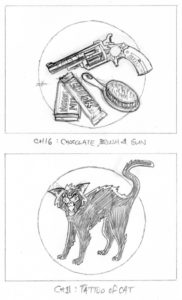 As I read, I note down the kinds of snapshots of images that would make a good icon for each chapter. The trick is to choose something in each chapter that will be eye-catching, distinctive, different from the other chapters and helps describe something in the story. You also have to be able to tell what each one is when it’s very small – these illustrations are only couple of centimetres squared when they’re printed, and I draw them at about five centimetres squared, so they’ve got to be clearly recognisable.

The first drawings are little more than scribbles, ‘thumbnails’ as they’re called in the trade. I do these on the proof pages themselves normally, trying to figure out what will work and what won’t. 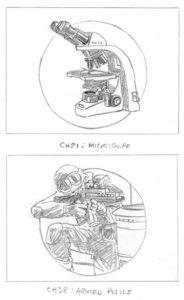 Then I move on to the proper pencil drawing. I have a standard template I work into when I start, which suits the head of a chapter; a wide rectangle marks the absolute margin for the picture, but the circle is the main frame, allowing for a bit of breaking out of that frame in most of the pictures.

I’ll use photographic references for some of these pictures – you can only find appropriate pictures about half the time, and even then, there’s a lot of adapting and simplifying.

For the Wildenstern books, I used an old-fashioned style with a lot of linework and cross-hatching. Because of the modern setting for ‘Rat Runners’, I changed the look just a little bit, using a lot more solid black with some linear pen shading, more like the very blocky black style I used in my earlier novels. 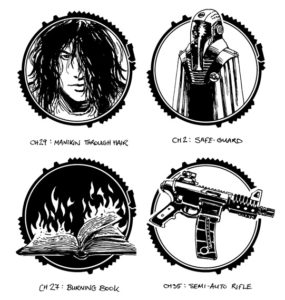 Each picture represents an image from that chapter – sometimes just a object that features, one that may not be vitally important, but gives a flavour of the text.

There are frames on these icons, though I haven’t used frames for the last few books. I do up a single frame separately (which, in this case, suggests a camera lens) then place it over each picture in Photoshop, once the drawings are scanned. Then they’re ready to send to the editor.

This is often the last piece of work I do for any book, bar the odd little text revision, and makes for a nice sign-off. It marks the end of the book and time to start on the next which, incidentally, is well underway.